It’s late at night, or maybe the wee hours of the morning before dawn. It’s quiet, the kind of quiet where you can hear the breathing patterns of everyone in the house and the creaks in walls and ceilings like invisible footsteps. Soft, yellow light glows like a halo around my crib. I am crying. I can’t hear myself crying but I must be because then she appears. I can’t see or hear her, her face is a blur, but in the thick fog of memory I can feel the tender notes of her voice, as soothing as honey for a sore throat.

There is the clink, clink, clink, of something being wound up, then the tinkling of music, like the kind that comes out of those music boxes with the ballerinas inside. This isn’t a box though; it’s a teddy bear with soft, chocolate brown fur. I imagine the bear is new, although I can’t picture it. Only the old bear with matted fur and scuffed plastic brown eyes and a black nose round like a mushroom top threatening to fall off. The wind-up key in the back can’t turn more than a half inch before springing back and stopped playing music decades ago.

Little do I know I will spend more of my life with that bear than with she who gave it to me.

That is all I have of my mother before. A memory like a phantom; so faint, so weightless, I don’t even know if it’s real or if it’s a memory I conjured up to comfort me.

My next memory is a monster, as elusive as the first but so terrifying I know it’s real. It is the memory of a woman whose walls have crumbled; collapsed from within. I hear her screams as I play with my toys. Do I stop playing? Do I hide? Am I afraid? I don’t know. I’m two-years-old. I know those screams are not for me. It is a sound like floodgates broken by water too heavy and too raging to be held back anymore.

Later I will learn she had had a nervous breakdown.

In my third memory I am in the backseat of a car driving away from a pink house. “She’s crazy. You’re never going to that woman’s house again.”

What do I feel? What am I thinking? Ice cold seeps into my veins, a cold that burns, numbing every inch of me. Waves of nausea seize my stomach. I don’t look back. 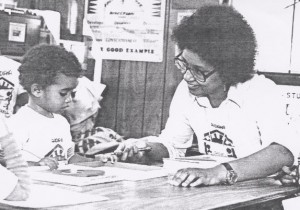 That woman. That woman. Her broken mind has changed her permanently. Manic depression. Bipolar disorder. Schizophrenia. These are words I will learn later to understand what is “wrong” with her. Seven years will pass before I stand outside the fence of that pink house. Six more before I walk through the door.

From the age of six till nineteen, when I moved out of my father’s house, I can count on one hand how many times I saw my mother. A longhand relationship on lined paper signed, sealed, stamped, and delivered a distance of four-and-a-half miles.

Four-and-a-half miles may as well have been an ocean for a girl growing up without her mother.

When I read Barack Obama’s memoir, Dreams From My Father, I was struck by what he said in the preface about his mother. Though in the book he focuses mainly on his father’s absence from his life and how that shaped him, he notes, “I might have written a different book — less a meditation on the absent parent, more a celebration of the one who was the single constant in my life.”

His words are striking considering that his mother spent most of her adult life in Indonesia without him. Reading that paragraph about his mother, who had recently passed away, my breath caught in my throat. I felt goosebumps rise on my arms. “The single constant in my life.” I knew exactly what he meant. I know how someone who is not there can be sometimes more present than those near enough to touch.

One of the things about growing older is having enough distance between my past and present to have a greater panoramic view of my life. And I can see in that larger view that, yes, she was there for all of it. It’s like those drawings that present two images but at first you only see one. Maybe you only see the young woman for many, many years and then one day you look again and, oh, there’s an old woman there too. Now that you see her, you can’t un-see her, and she won’t leave the picture either, because she was there the whole time.

In the stills of my life, I look back and see my mother in every frame. She was there, in the shadows. I can see her there, in my thoughts, and in hers. She lived in my heart and in my mind. She lives there still. She’s been dead for almost eight years now, but she lives on in my memories and my hopes and prayers to reunite with her in a place neither of us ever has to leave. Perhaps then we can relive my girlhood, together.

Goodbyes are only for those who love with their eyes.

Because for those who love with heart and soul

there is no such thing as separation. 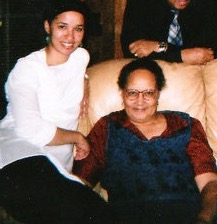 Ambata Kazi-Nance is a writer and teacher living in her hometown New Orleans, LA with her husband and son. She is a member of MelaNated Writers Collective, a group for writers of color in New Orleans. She writes for Azizah magazine and is a contributing blogger at Grow Mama Grow (www.patheos.com/blogs/growmama) an online community for Muslim mothers. She blogs about writing and other things at www.aknthoughtsonthings.wordpress.com and you can find her on Twitter @NolaWanderer.

This piece originally appeared on the Love, InshAllah blog on Patheos.

With Malala Yousafzai’s recent turn addressing the UN, some have expressed concern, bordering on disdain, for Western media outlets and politicians who are vociferously amplifying Malala’s celebrity. For example, Assed Baig recently wrote for the UK edition of the Huffington Post an article titled, “Malala Yousafzai and the White Savior Complex.” Baig, giving voice to the feelings of many, remarked, “… Malala has been used as a tool by the West…