On February 10, Abdul Jamil Kamawal, a 68-year-old Afghani American man, was bludgeoned to death with a shovel in a suburb of Portland, Oregon. Remembered as “a pillar in the Muslim community,” he had helped refugees settle in the region for over two decades. 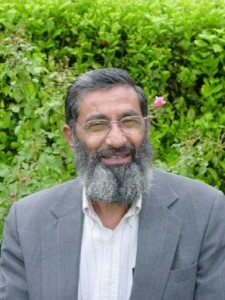 He also founded two non-profit organizations that focused on “rebuilding lives and communities in Afghanistan.” The alleged murderer was doing construction on a home owned by Mr. Kamawal. No motive for the attack has been established.

While normally experienced at a lower level, such violence is a normal state of affairs for Americans of a particular physical appearance. For three months now, the United States has witnessed an unending litany of hate crimes against Muslim Americans, and those presumed to be Muslim. This physical manifestation if ideological bigotry is hardly new, flaring up cyclically in response to events beyond the control— and comprehension— of the millions of innocent Americans it endangers.

The attacks on Muslim Americans and their sacred sites is rarely newsworthy, as most of these incidents garner no attention in the mainstream media. And it is normal. According to FBI Statistics, following an immense escalation post-9/11, the number of hate crimes against Muslim Americans has stabilized at approximately five times the pre-9/11 rate. Even more distressing, those figures exclude the enormous number of people terrorized by fellow Americans because they were mistaken as Muslim— like Sikhs and other South Asian Americans— and the far larger total who never report hate crimes.

Following the international explosion of anti-Islamic prejudice radiating from the horrifying terrorist attacks in Paris, and the subsequent attack in San Bernardino, CA, this normalized state of hate violence has again intensified frighteningly. As a consequence, just as 2014 exposed “post-racialism” as either a self-congratulatory fantasy or an effort to submerge discussion of racial inequality, 2015 has conclusively demonstrated the obsolescence of the term “Islamophobia.”

It has become increasingly evident that the term fails to capture the endemic suspicion and vilification of Islam and its adherents, and the resultant hate violence presently decaying so many societies claiming the Enlightenment’s legacy. Surveying our toxic social landscape, it has become apparent that we are not just talking about fear, but entrenched bigotry.

The closer we look, the more clear it becomes that this is not some unique manifestation driven by theology or current events, but a modern extension of our centuries of blood-drenched supremacist history. Bigotry against Muslims is not some current trend, but the continuation of a centuries-old American tradition of demonizing peoples of color, visible “others,” who look, dress, speak, worship, or think differently. It is long past time to be honest about the invective directed at Muslim Americans, and understand it within this historical context.

This continues to be an especially difficult time to be seen as Muslim in the U.S. The leading Republican Presidential candidates have coarsened the fabric of the republic with increasingly unconstitutional proposals that single out Muslim Americans for additional, illegal State scrutiny and inequitable treatment—banning their entry, registering families in databases like felons, and continuing the years of barely secret state surveillance of sacred sites. In fact, the open dehumanization of Muslims by public officials, in combination with unending stream of hate violence, has convinced many that the situation is worse now than at any time since the post-9/11 hate crime epidemic of historic proportions.

Within this context, I propose Islamo-racism as a far more precise term to describe this socio-cultural pandemic. Like other strands of chauvinism emanating from the racial and religious supermajority’s often malevolent dominance of U.S. history, it is a well-defined racist trope with a distinct, traceable history. This history is comparable to, yet distinct from, that of other racial and religious minorities, all victims of various forms of majoritarian violence. Like other variations of U.S. racism, such as that which simultaneously denigrated the religious culture and humanity of American Indians and early Asian immigrants, Islamo-racism’s structure is significantly complicated by the melding of racial and religious bias that animates its core.

Like other configurations of U.S. racism, Islamo-racism encompasses a distinctive imagery incubated from historic stereotypes. It is anchored by the ominous figure of the bearded, dark-skinned, turban-wearing terrorist, a misrepresentation long accepted by most Americans. But this collection of Orientalist imaginings is also peopled by shrouded, oppressed women, and pre-modern fanatics guided by archaic religious strictures. These prejudice-laden conceptions shape decisively, for most Americans, their impressions of Muslims and Islam.

Islamo-racism also contains a distinct, widely misused lexicon (jihad, shariah, suicide bomber, “no-go” zone, terrorist, refugee etc.). And like other racisms in our past and present, Islamo-racism has a definite political utility. In recent years, the GOP has successfully rearticulated its extraordinarily successful race-baiting “Southern Strategy” for the 21st century, with Muslims joining African Americans as the foil to draw fearful white votes. This political ploy has helped set the stage for this latest explosion of racist rage.

These components of bias comprise a structure of Muslim-hating, demonizing as anti-American a visibly identifiable “other” stigmatized by its racial and religious distance from society’s presumed “norm.” This burgeoning racism sharply limits the safety and freedom of Muslim Americans, and those perceived as Muslim.

Islamo-racism is absolutely characteristic of this period in our collective history. Its expressions will inform how future generations and historians recall this time. Guantanamo Bay will define this era and live in infamy just as American Indian genocide, the enslavement of African Americans, the violent eviction of Mexicans from post-conquest California, and Japanese internment are seen as reflective of our national character in those historical moments.

One may ask why I would classify bias against a faith community as a form of racism, particularly one as racially diverse as Islam. In response, I proffer the experiences of the Muslim, Sikh, South Asian, and Arab Americans since 9/11. The collective histories of these communities presents convincing evidence of an ongoing process in which religious identity has become racialized, or weighted with racial meaning.

The racial identification of members of these communities often derives directly from the racial meaning placed upon religious markers. For example, the emblems that distinguished the victims of post-9/11 hate crimes were not solely or even primarily racial, but religious signifiers that became racialized indicators. These conspicuous religious symbols include facial hair, non-Western attire, and religious headwear like the turban, topi, or hijab. While physical appearance still normally determines race in the U.S., racialized religious indicators greatly complicate the equation for the “apparently Muslim.”

In conjunction with the brown skin of those who usually wear them, these religious markers identify wearers as members of an unofficial racial category that has been in operation since 9/11: apparently Muslim. Members of the ethnic, racial, religious, cultural, and national groups contained within this grouping are both racially and religiously marked as “other” in society. They are too often reminded in their daily lives— when traveling, when dealing with police, when applying for jobs, when receiving poor service, when targeted by hatred from strangers— that they have become de facto members of a new racial designation with sharply limited freedoms.

So why is this seemingly semantic difference important? For one thing, by understanding Islamo-racism as far more than a phobia, we can see the direct links between this seemingly isolated phenomenon and our nation’s lengthy history of white and Christian supremacy. We have been here before, and we can learn from our past mistakes by examining the compelling historical parallels that emerge from history.

Understanding the nature of Islamo-racism is also essential to understanding the contemporary realities of being “apparently Muslim.” In these communities, race and religion have commingled to form aspects of an othered identity which is not only outside of the mainstream, but one that has been criminalized by the State. Furthermore, Islam and Muslim Americans have been deceitfully vilified by influential political, religious, and media figures. As a consequence, visible religious identity has emerged as a primary factor rendering individuals vulnerable to the social degradation— and potential violence— that has plagued peoples of color throughout our history.

Putting Islamo-racism in historical perspective also illuminates our understanding of an old societal disorder. The contemporary use of religion as a tool with which to differentiate and designate the “other” in public life— a space once occupied in our past by every community of color— mimics closely the role of race in our collective history. Once we historically contextualize Islamo-racism, we can see clearly how identity (or perceived identity) is again being deployed by demagogues to divide Americans, for personal gain.

Ultimately, identifying Islamo-racism as a strain of racism illuminates a major impediment to building a more egalitarian nation, one in which people are judged for their character instead of their race, ethnic, or religious identity. By rejecting the fanciful specters conjured by the peddlers of this latest brand of American racism, we must stand against the rising tide of bigotry sweeping the nation with renewed vigor in the Age of Obama. If we cannot find the courage to fight this battle now, it will continue to vex future generations.

Jaideep Singh is a scholar/activist whose work examines the intersection of racial and religious bias in society. He held the Sabharwal Chair in Sikh and Punjabi Studies at CSU East Bay, and co-founded the Sikh American Legal Defense and Education Fund (SALDEF). Dr. Singh has taught Ethnic Studies at several universities in California, offering courses that interrogate the centrality of race, gender, ethnicity, and class in U.S. history and contemporary society.

This piece was originally published on, and is featured from, Race Files, a project of CHANGELAB.

When I did a search for Professor Robert P. George, Ryan Anderson, and Sherif Girgis’ recent essay “What is Marriage?” for the Harvard Journal of Law and Public Policy, I couldn’t help but notice the Google advertisements that appeared on my sidebar. The first touted “Gay Marriage in D.C.” The second offered guidance on how to “Become a Marriage Therapist.” The third, and most disconcerting, advertised for “Beautiful Russian Girls Seeking Marriage in USA.”