Since 9/11, each election cycle in America and in European nations brings with it a renewed fury over the debate of whether or not Islam is compatible with the West. When politicians stoke their citizenry’s latent fear of Muslims to drum up votes, hijab-wearing* Muslim women are arguably the ones who suffer the most, bearing the brunt of hate crimes and verbal vitriol. They become the unwilling symbols of a cultural war with their dress representing oppression to one side and religious freedom to the other.

Just this past summer, Muslim women’s garb yet again found itself at the center of a social media firestorm when local municipalities in France passed laws banning burkini-clad women from their beaches. According to French authorities, this full body swimsuit defies the country’s secular values and demonstrates an overt allegiance to Islam at a time when France is a target of terrorist attacks. The French Prime Minister Manuel Valls said that “For me the burkini is a symbol of the enslavement of women.” Ironically, the photo of four, armed French police officers menacingly standing over a middle-aged woman as she removed her tunic, looked a whole lot like oppression. This paradox didn’t escape cartoonists who drew contrasting pictures of French police forcing a Muslim woman to undress, while ISIS figures forced another Muslim woman to put on a burka**. The message was crystal clear—telling women what they can and cannot wear is oppression. In fact, each is a manifestation of patriarchy. After all, the French are not passing laws about the length of men’s beards. 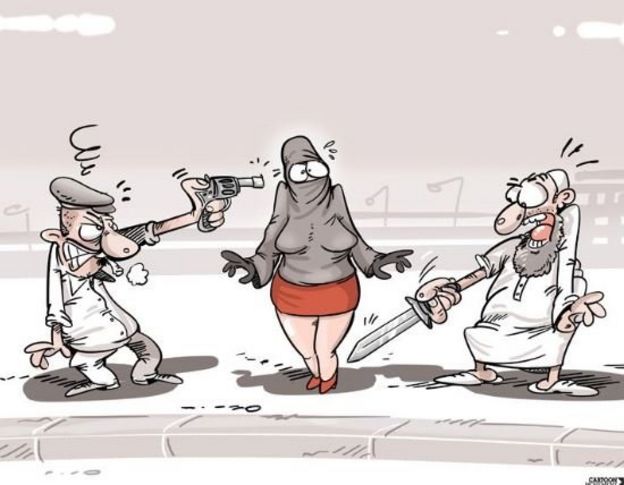 Still, there are those who passionately disagree, arguing that the hijab itself is oppressive because it is linked to a system that seeks to control and subjugate women. It is true that the hijab has been wielded as a weapon used to oppress women—whether by the father who forces his American teenage daughter to don the headscarf or by an ISIS gang that punishes, even kills, women who deviate from their burka dress code. Both are wielding patriarchy with the dangerous result that others then categorize an entire religion as inherently repressive and misogynistic.

It seems that when you peel away all the intellectualizing layers, the basic assumption behind the idea that the hijab is oppressive is that no woman would choose to dress in this way. It must be ignorance or coercion that keeps her from casting off her hijab, right? But let’s turn this question on its head. Instead of wondering, “Why would anyone in her right mind wear hijab?” let’s ask, “Why would a woman living in the West wear hijab when the majority culture regards it with such suspicion and hostility?”

For many women, the answer is liberation. The hijab offers them a sense of freedom. Sure, there is the freedom from feeling you have to keep up with the unattainable, narrowly-defined concept of beauty in the West—long, lush hair, a size zero figure, and flawless skin. After all, when your hair and body are cloaked, you no longer have to join in the exhausting daily race to look perfectly put together. But this type of liberation only goes so far; it alone cannot explain the existence of hijab-clad women in Western, Islamophobic societies.

The true liberation is of a spiritual nature. When a Muslim woman covers her hair and/or body out of a belief that this is what God asks of her and that through this act of religious observance, she will draw nearer to her Maker, she experiences an incredibly pure form of liberation—the kind of freedom that comes from seeking only to please one’s Creator rather than to please society, family, friends, co-workers or strangers. She no longer bows to the pressures or bends to the expectations of people and sees herself as accountable only to God. She even refuses to become a slave to her own desires and whims. In this sense, a freely-acting, hijab-wearing woman is the most liberated woman of all.

The confident, content, and covered woman flies in the face of people who regard Islam as oppressive and can create deeply uncomfortable cognitive dissonance. Just like many African-Americans in the 1970s disputed Western concepts of beauty when they threw away their hair-straightening regimens to sport natural Afros, the Muslim woman in her modest dress challenges the dress code of our society today. Unfortunately, this affront comes at a cost.

There was a time in America when wearing a scarf was simply viewed as a manifestation of religious freedom, and this is certainly still the case for some—consider Catholic nuns and Amish women, but like it or not, for Muslim women, the personal has become the political. The barbs and slings are all too real—from having headcovers yanked off, to clothes set on fire, to physical assaults by police, and to, most tragically of all, the recent murder of 60-year-old Muslim woman, Nazma Khanam. Muslim women’s bodies are once again the political battle ground. Hateful rhetoric and hate crimes have infected Western societies to such an alarming degree that many Muslim women now feel less free to truly experience the liberation that is so deeply tied to religious freedom.

*Hijab in this article refers to any form of clothing that covers the head and/or body in order to maintain a certain standard of modesty.

**A burqa is an enveloping outer garment worn by women in some Islamic traditions to cover their bodies when in public.

Margaret A. Johnson, Ph.D. as the owner of Transfirex Translation Services, Inc. manages the translation of words, and as a sociologist, writer, and interfaith activist works to translate different ways of understanding our world to help us recognize our common humanity.

“When I first started fasting regularly, I would be forced by others in the family to wake for Sehri, the predawn meal, even when I was menstruating lest the male members would sense that I was menstruating. I would then have to fake fast and say prayers before the elder…