The #GlobalShutdown continues today, from NYC to Berkeley and Tokyo to Melbourne, people are protesting the grand jury decision to not indict NYPD officer Daniel Pantaleo for his responsibility in the death of Eric Garner. Protesters have successfully rallied and blocked major roadways, tunnels, and city centers since Wednesday night. Though the protests have remained mostly peaceful thus far, with marches and “die-ins” demonstrations, this has not stopped police from targeting many protesting – even praying rabbis have been arrested. In Berkeley, clashes turned violent between police and protesters. Nevertheless, over 1500 protesters there still managed to shut down I-80, both westbound and eastbound on the night of December 9th. This afternoon, Black Congressional staffers staged a walkout in solidarity with the ongoing national and international protests. 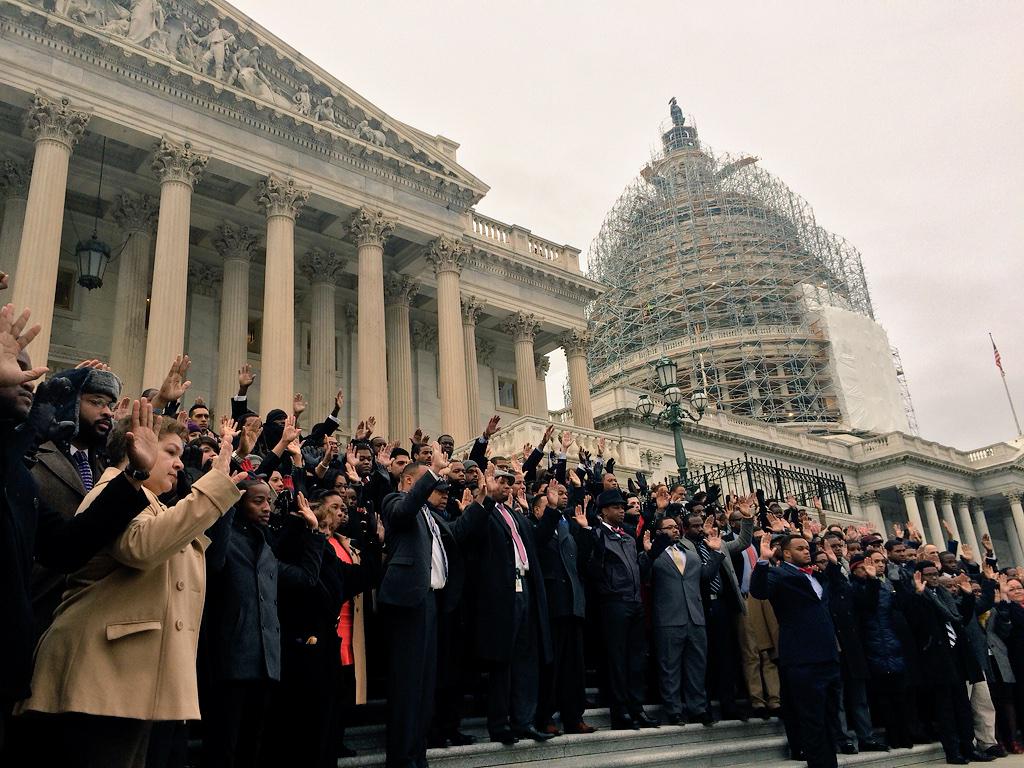 Congressional staffers walk out on December 11th to protest the grand jury decisions not to indict the officers who killed Garner and Brown. Photo: Huffington Post/Ryan Reilly

The die in in central square. Photo: @nadeemtron

Last Friday, United Nations human right officials criticized the grand jury decisions in the deaths of Brown and Garner and called on the US to stop policing practices that disproportionately target Black Americans. According to international law, the use of lethal force is permissible when it is necessary to protect life.

The decision not to indict Pantaleo for killing Garner struck a chord even among those who were unsympathetic or apathetic about the same outcome a few months ago for Officer Darren Wilson after he shot and killed Michael Brown, an unarmed teenager in Ferguson, Missouri. Even conservatives (including Bill O’Reilly) are expressing shock and outrage. On social media the conversation has centered around trending hashtags like: #blacklivesmatter, #crimingwhilewhite, #shutitdown, #icantbreathe. It’s a lot to take in and process, let alone understand. Something is amiss in our justice system when there are absolutely no repercussions for a police officer who we know through clear videotaped evidence used extreme force and killed an unarmed man while trying to arrest him for selling illegal cigarettes. So how do we make sense of what happened? What are the protestors demanding? Where do we go from here? altMemo breaks it down here.

The Protest Demands The protests are a response to grand jury decision not to indict Officer Pantaleo. The protesters outrage is also amplified by the November 24th grand jury decision not to indict Officer Darren Wilson for fatally shooting unarmed teenager, Michael Brown, in Ferguson, MS. As such, the protesters are demanding further federal investigations and calling for reforms aimed at countering police aggressiveness and brutality around the nation. The Justice League in NYC, which has been leading with protest demands to establish protocols for greater police accountability, has asked for 5000 signatures for its online petition by 4pm on, Wed., Dec. 10th: http://www.gatheringforjustice.org/.

NY Protesters will be taking their demands to City Hall today.

Backstory On July 17, 2014, Eric Garner was stopped in Staten Island by police officers on the suspicion of selling loose, single cigarettes from packs without tax stamps. Garner said he was innocent and that he was tired of being harassed by the cops. “It stops today,” he says. Two officers including Daniel Pantaleo close in to arrest Garner. Garner pulls his hands away. Pantaleo puts his arms around Garner’s neck in what appears to be a chokehold, an illegal tactic that banned by the New York Police Department (NYPD). More officers come to the scene and Garner is held down. During all this he is heard gasping for breath and repeating, “I can’t breathe.” This was all recorded in video that soon went viral. A second video taken by a bystander revealed Garner lying motionless and unresponsive before paramedics arrive. Garner went into cardiac arrest while in the ambulance. An hour later, he was pronounced dead at Richmond University Medical Center.

After Garner’s death, Officer Pantaleo was stripped of his handgun and badge and put on desk duty. Another involved officer, Justin Damico, was also placed on desk duty but not stripped of his gun or badge. Four of the responding EMTs and paramedics were suspended without pay. Ramsey Orta, the man who recorded the incident, and his wife were also arrested on unrelated charges soon after Garner’s death. The wife was released while Orta waited on bond. Both claimed they were being set up because of the recording. In August, the city medical examiner ruled the death a homicide, stating the compression of the neck and chest, along with the way Garner was positioned on the ground killed Garner. Contributing factors included were Garner’s acute and chronic bronchial asthma, obesity and hypertensive cardiovascular disease.

The Grand Jury Decision On December 3rd, after a two months of prosecution presentations, the grand jury voted not to indict Officer Pantaleo for the murder of Eric Garner. Justice Stephen Rooney of Richmond County Supreme Court allowed the release of limited information on the otherwise secret proceedings. From that release we know:

The limited release is unlike the approach taken in Ferguson, where all of the evidence and testimony that was presented to the grand jury was released to the public.

What is a grand jury? Grand juries are usually 23 jurors selected to meet in private to determine whether there is enough evidence to take a case to criminal trial, whether before a jury or judge. By law, these proceedings are kept secret and the only evidence presented is that which is introduced by prosecutors. Prosecutors are also the ones to instruct the grand jurors on the law as it pertains to the case they are evaluating. A decision is made when at least 12 jurors agree.

Grand juries in the context of this case: Grand juries usually do vote to indict, and by usually I mean 99% of the time. This should not be surprising since grand juries are directly influenced by everything prosecution instructs them to review. However, when it comes to cases that involve police officers it is rare to get an indictment of an officer for an on-duty homicide. These numbers get even smaller if the victim was black versus white. Critics of the use of grand juries in such cases point to the existing relationships between prosecutors and police officers and the unlikeliness that a DA would offer up evidence to indict “one of their own” – with the standard secrecy surrounding grand jury proceedings this all remains unclear. Some insight into the mindset of Staten Islanders – where the Garner grand jurors were based – was provided by a Quinnipiac University poll which found:

The Issues: Race & “Justifiable Homicide” Criminologist David Klinger of the University of Missouri-St. Louis points out the following in Vox: Under the Constitution, police officers are permitted to use force or shoot under two circumstances:

With both of these legal standards what matters is not the actual threat when force was used, but the perceived threat — the officer’s “objectively reasonable” belief that there was a threat at the time. (Graham v. Connor) Intentions do not matter. The state of the victim’s health is also not relevant to determining culpability (ahem, Peter King). Both these factors and others can be taken into consideration for the type of charge and degree of culpability. A death that results from either of the two circumstances would be considered a “justifiable homicide” by law enforcement. As such a police officer can kill you if he believes you pose a threat to him/her or someone else or believes that you are suspect of a violent felony. As such, a police officer’s attitudes towards those different from him/her could reasonably influence that belief. This graphic from Colorlines shows some recent notable homicide cases involving Black victims and White cops and their outcomes.

Young black males are 21x more likely to be fatally shot by police than their white counterparts according to ProPublica’s analysis of the FBI’s data from 2010 to 2012.

With more attention being given to racial attitudes that influence police behavior, some non-White police officers have been speaking out about the latent and overt prejudice they have witnessed, and claiming that Black and Brown men are commonly seen as “thugs” and targets by law enforcement. *It should be noted that there is insufficient data to prove a “Black-on-Black” crime epidemic or some sort of relationship between Blackness and violence — no matter what Rudy Giuliani thinks.

There is a problem in data reporting and gathering for researching of “justifiable homicides” by law enforcement. There is an issue of underreporting by the FBI, no reporting by thousands of local law enforcement agencies around the nation, and inconsistencies in categorizations of data that is reported. Incomplete data makes it difficult to assess and target specific issues.

What we do know:

From 2005-2012, a black person was killed at least twice a week by a white police officer in the United States based on FBI data collected of justifiable homicides.

According to FBI data and an Urban Institute study on “Race, Justifiable Homicide, and Stand Your Ground Laws Analysis of FBI Supplementary Homicide Report Data” blacks killed were 2x likely to be under 21 years of age compared to whites. White-on-black killings are significantly more likely to ruled as justifiable homicides than black-on-black or black-on-white compared to white-on-white.

The broken-windows theory is one of the most influential concepts behind law enforcement today in the United States. It posits that there is a slippery slope between disorder and crime. If we take this idea of broken windows escalating to crime and apply it to police agencies, what are the consequences of unchecked police misconduct? As a former cop in the St. Louis police department wrote in the Washington Post, “The problem is that cops aren’t held accountable for their actions, and they know it…They know there’s a different criminal justice system for civilians and police.”

Body cameras (or video) on law enforcement do not necessarily help if there is no actual consequence for overly aggressive behavior — as we have seen with the Garner case. Records show that of known reports a relatively small number of cops generate the most civilian complaints, but the NYPD routinely ignores recommendations on how to discipline the worst of them.

Despite the grimness of it all there have been glimmers of hope throughout the week and Justice League organizers are claiming that policymakers are paying attention and making moves. Federal investigations have begun for both the Brown and Garner cases. In Boston, police officers and local teenagers gathered to discuss police and neighborhood concerns. In Richmond, Chief of Police Chris Magnus showed solidarity by standing with protesters, saying:

“I spoke with my command staff, and we agreed it would be nice to convey our commitment to peaceful protest and that black and brown lives do matter,” Magnus said after the protest. “And to help bridge the gap that we understand sometimes exists between police and community around certain issues.”

In Portland, this emotional moment was captured between a protester and a cop:

Just to keep it all in perspective, Slate presents an on-point satire describing how we would cover the situation if it were occurring in another country:

“The heavily armed security forces in this large and highly militarized country have long walked the streets with impunity, rarely if ever held accountable for violence committed against civilians. In recent weeks, however, several such incidents have ignited public anger and threatened to open new fault lines in a nation with a long and tragic history of sectarian violence.”

On Saturday nights, a man stands on the Third Street Promenade in Santa Monica yelling false and insulting words against my religion and its followers. I am Muslim; I wear a headscarf, so this feels personal. And while I’ve become somewhat desensitized to it, it is still awful to listen…